It was a special day!

It was our son’s four year old birthday and a day for making memories. At this time in our lives, we had been living in the Cascade coastal mountains outside of Beaver, Oregon. Three days of almost non-stop snow and sub-zero temperatures had left our snug little home feeling like an Arctic cabin. Still, this was a very special day and we woke in the morning with the sun beckoning us outside for an adventure despite the cold.

On the 22 acre property that we were renting flowed Slick Rock Creek. At the top of the creek is a waterfall. Actually it is a double-tiered cascade of water that falls 60 feet into a bubbling white pool. We visited the falls often taking leisurely walks along the creek banks through the woods. We had been known to see a variety of wild life along the way, but on that day, the weather was going to give us an entirely different experience along Slick Rock Creek.

We quickly finished our chores and began the task of bundling up for the walk. The weather outside was about 10 degrees with a wind chill below 0. Snowsuits over fuzzy warm jammies, fleece lined moon boots, heavy gloves and hats worn under winter snow suits and coats were the order of the day. We dressed an excited little Aaron who was anxious to get started on his birthday adventure. Rachel, our little one, was five months old. We had to take extra care in her clothing to ensure that the cold stayed out and the warm in. Finally we were ready.

As we began the trail, we were joined by our usual animal escorts. Blackie the dog bounded ahead to clear the trail from numerous unseen enemies, always sprinting back to check on our progress. She had walked this trail with us many, many times. But today was different. The “baa’s and maa’s” of our goats Jack and Streaker, broke the still silent air as they also tagged along behind us. 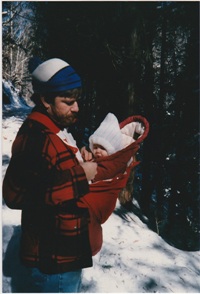 It was hard going, but we pushed ahead purposely knowing that we needed to limit the amount of time we exposed the kids to this frigid air. We plodded through 18 inches of unbroken snow. First in line was my hubby with little Rachel snuggled into her front pack baby carrier. I followed along holding the tiny mittened hand of Aaron thinking as I walked about how quickly the past four years in his little life had gone. He was no longer a baby but a wonderful and smart little boy. We had to proceed with caution because of several places along the trail that were “dicey” even on a good weather day. We carefully crawled over the top of several trees that had come down during the storm. We saw none of the usual critter markings along the way. Even the elk, deer, bobcats, coyotes and bears were hunkered down safe and warm in some woodland cave or hollow tree. Half way along we stopped to catch our breath. Our faces tingled with the bitter cold wind. We wondered if this was all going to be worth it. What if we don’t see what we have anticipated at the end of this journey?

A little further on, we passed the beaver colony. Not all the animals were taking it easy in the chill of the day. We paused to marvel at the fresh cut teeth marks on some large trees around the pond. 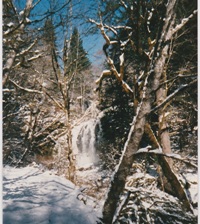 Ahead we heard the sound of falling water. We hurried on, anxious to see if the efforts of our expedition will be rewarded. 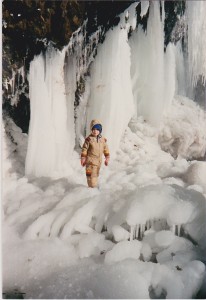 Finally we arrived! A magical winter wonderland lay before us. Frothy slivers of water cascaded over the falls. The mist was frozen on the rocks and trees below. A rainbow could be seen arching out of the pool at the bottom and giant icicles were suspended from the rocks like crystal daggers. The ground at the base of the falls looked like thousands of white crystal marbles held together by fluffy white frosting. We stopped and stood in awe. We hardly wanted to move for fear of breaking the spell of this unbelievable wonder that God had created. Awesome doesn’t even begin to describe this scene… this moment that was frozen in time.

A small fussing voice in David’s backpack soon reminded us that we must not tarry much longer. We had already been outside for nearly two hours. We quickly took some photographs and turned back to begin the long walk home. We kept looking over our shoulders as we walked along, not wanting to give up that very last glimpse of the ice castle kingdom.

The walk back was quick and uneventful and we were soon safe and warm again in our little mountain home. Along the way we chatted about what we had seen and how it would be a day we would never forget. We hoped that the camera wouldn’t let us down and would produce a few images that could allow us to keep the day’s adventure fresh in our minds and hearts for years to come.

Back at home we began the slow process of unbundling; taking time to warm up by the fire as we peeled off layers of warm winter clothing. It had been such a special day. A day of memories! It had been A Serendipitous Moment.