We all love a good mystery. I think it’s in our human DNA.

Even at a young age when we would read to our kids growing up, the books that had an air of uncertainty and mystery always left them asking us to “read it again” or “read one more chapter.” What would happen next? 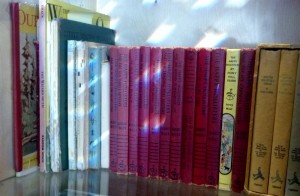 We did not own a television in the Nice home until the kids were in junior high school, so naturally our evening family entertainment focused on board games and lots of reading. Our family favorite for many years was a series called, The Happy Hollisters by Jerry West. The first four books in this series were published by Doubleday & Company, Inc in 1953 and there are 33 books available. In doing a bit of sleuthing on google, I discovered that even  60 years later, The Happy Hollisters and their adventures are still a favorite staple in family and young adult reading. There is even a Facebook page as well as numerous websites dedicated to keeping the spirit of Ricky, Pete, Pam, Holly, little Sue and Zip the dog alive for the next generation. 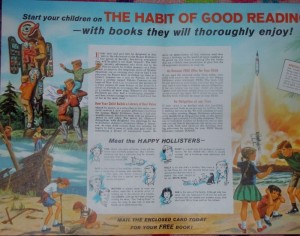 What our family loved about these chapter books was the “cliff hanger” that always ended every chapter. Since we only read these on evenings that David was home from work, the chapter ending always had us anxiously waiting and wondering until he was home next and we could continue the story and find out what happened. Such as this excerpt from book one (starting on page 53).

“It’s going to rain,” shouted Pam. We’d better get back to shore.”
Holly had often seen Pete whirl the boat around fast by holding one oar in the water and rowing hard with the other. She would try this. But as she did so, both oars slipped from her hands. They jerked clear out of the oarlocks and landed in the water. Before Pam could grab them, they had drifted away from the boat.
“Oh dear,” wailed Holly, “what’ll we do?”
Pam knew she must not become panicky. “We’ll paddle with our hands,” she decided in desperation.The two girls started to paddle this way as fast as they could. But by this time the strong wind had begun to blow, moving the boat farther and farther from shore. The girls cried for help, but their voices were lost in the strong gale. Soon they were in the middle of the lake, with whitecaps slapping at the side of the boat. Then the shore of Blackberry Island came into sight. The wind was blowing them right toward it! When the rowboat touched the shore, Pam hopped out and helped Holy up on the pebbly beach.
“Oh, I’m glad we’re here,” said Holly with a sign of relief.” But how’ll we get home?”
“Just wait for somebody to come and rescue us,” Pam answered hopefully.
After a slight sprinkle of rain, the storm cloud passed over, and the wind died down. Pam took Holly’s hand, and they walked along the shore together.
“Do you suppose anybody lives here?” Holly asked her sister.
“Daddy said there used to be a farmhouse on this island once, “Pam replied, “but nobody lives in it now.”
“Somebody’s been here today,” Holly said. “Look!”
She pointed to a group of loose stones in the sand. It was a crude fireplace with a few blackened embers. There was still warmth in them!

At the writers’ retreat I attended recently at the Balch Hotel, our inspiring teacher for the weekend, Jennifer Lauck, suggested to me that I read a book called Bel Canto by Ann Patchett (published in 2001 by Anne Patchett). The author wastes no time weaving an air of mystery right from the very first paragraph on the very first page.

“When the lights went off the accompanist kissed her. Maybe he had been turning towards her just before it was completely dark, maybe he was lifting his hands. There must have been some movement, a gesture, because every person in the living room would later remember a kiss. They did not see a kiss, that would be impossible. The darkness that came on them was startling and complete. Not only was everyone there certain of a kiss, they claimed they could identify the type of kiss; it was strong and passionate, and it took her by surprise. They were all looking right at her when the lights went out. They were still applauding, each on his or her feet, still in the fullest those of hands slapping together, elbows up. Not one person had come anywhere close to tiring. The Italians and the French were yelling, “Brava! Brava!” and the Japanese turned away from them. Would he have kissed her like that had the room been lit?” 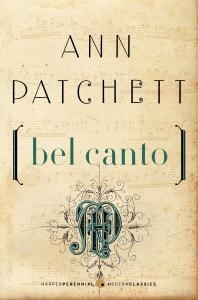 I am not done reading this book yet. I’m only about ½ way through…but I can’t wait to see what happens. The opera singer, the Japanese man, the kiss? And why did the lights go out? You’ll have to get it for yourself to see what happens and how it plays out. Thanks Jennifer for recommending this exciting mystery by Ann Patchett. Not typically the genre I read, but I am totally invested in this journey in Bel Canto.

So that brings me back to my writers corner and a short excerpt from Danny, Duck and I; The Desert Adventure. (by Connie Nice, unpublished). This is one of a several series of short children’s stories that I started working on when my Aaron was four. They are stories of the adventures of a little boy and his imaginary friends. In the middle of the story, the trio are about to head back home after a day of play. But they are disappointed they hadn’t been able to find an “adventure”….until.

“Just as we were thinking we would have to wait for an adventure for another day, we saw a strange footprint in the sand. Was it a rabbit? No. Was it a mouse? No. Was it a roadrunner? Of course not! Was it from our friend the coyote? Duck didn’t think so. Maybe it wasn’t too late to find an adventure after all. We decided to follow the footprints to see where they would lead us. But what did they belong to? We followed the tracks, Danny, Duck and I. We followed them step by step. They went up and up almost to the clouds then stopped at an opening of a big, dark cave. “

Hopefully I will be able to publish this story someday so you can all find out what or who they found in the cave!

I love this quote,
“A good mystery keeps you up on Saturday night. A bad mystery puts you to sleep on Sunday afternoon. Either way, you come out ahead.”
― Elizabeth Jane Howard

So, since today is #FictionFriday, maybe you need to pour a glass of wine, grab that dusty mystery book off the shelf and see where it takes you. Feel free to share! What’s your favorite mystery book?