As parents we recognize immediately after they place that precious little child in our arms in the hospital, that we would do anything in our power to protect and nurture this priceless gift. I know for myself, that I would give my very last breath for my two kids (and now my grandson) if it meant their life and safety. Even in the animal world, the desire to nurture and protect can be found. This is the parable of Massey Harris. 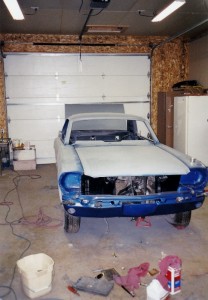 On our farm in Tillamook, Oregon, our kids each had different types of animal projects that they used for business and 4-H. Our son, Aaron had a very thriving and successful meat and show rabbit business. So successful in fact that he bought his first car at age 12 with the profits from his rabbit business…a classic 1966 mustang, which he and his dad restored over the years until he was old enough to drive it.

Our daughter, Rachel had a love of poultry starting at a very young age and when we moved to our five acre farm, she was finally able to have the big chicken coop she had always dreamed of. She was a hard worker and took good care of her little flock. She and her dad built an egg incubator out of a Styrofoam ice cooler, a thermostat and a light bulb and she used this to hatch out hundreds of chicks over the years.

The little hens she raised went into the egg laying flock, and the roosters were sold or became Sunday dinner. But she had one rooster that she fell in love with and who was gentle enough to warrant keeping him around. He was a giant mixed breed that she named Massey Harris. His name was like the farm tractor, but it actually came from a rooster in an audio story called The Fox Busters (by Dick King-Smith) that we had listened to on a long family road trip.

Massey Harris was a rare kind of rooster. Rare, not because of his breed or his size, but rare because he was kind and gentle, an attribute that I can assure you is not common in roosters. He was big and beautiful, and he loved Rachel. I really can’t explain it. They just had a bond that defied nature. 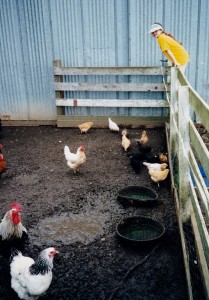 In the barnyard, Massey was the ruler of the roost – literally! He was in charge of the flock of laying hens that included a variety of Barred Rocks, Buff Orphingtons and Rhode Island Reds as well as few smaller Bantam chickens being trained and groomed for future show tables. He was the first to eat, first at the fresh water, and the first to get groomed and “dusted” with mite powder. Nothing entered or exited the chicken coop that he was not aware of. He had over the years fended off several raccoons and roaming neighborhood dogs; protecting his flock like some silent and stealthy ninja warrior.

One day, our farm was hit with a sudden wild coastal Oregon storm. The wind began to blow and the rain came down in buckets, hitting the farm animals like a tidal wave. We went into “batten down the hatches” mode. This involved securing and closing barn doors and double checking latches and cages to be sure all the animals were safe and dry. But for some reason, the chickens were not inside their roost to ride out the storm. We went around the barn to the chicken yard and were astonished at what we saw.

Huddled in the corner under the overhang of the eaves, was Massey Harris. He had his wings stretched out as far as they would go. He was making an insistent cackling sound, and under his outstretched wings were the hens. He was there, taking the full brunt of the wind and the rain, all the while keeping the hens safe under his wings. It was a sight I had never seen before and have not seen again since. We quickly gathered up the flock and carried them inside to the relative warmth of the barn, giving extra attention to this giant rooster that had taken on the role of protector and provider to those in his care; care that would later be rewarded in an unexpected way.

Massey Harris lived a good and long life in our barn yard. As he aged, he started moving slower and slower. But eventually his eye sight failed and he became completely blind. This bothered Rachel quite a bit as she pondered if maybe it was time to extend grace and mercy to Massey Harris and put him out of his misery. Then one day when she went to the barn to feed her birds, she witnessed something that changed her mind.

There in the barnyard was Massey Harris. Next to him were the usual flock of laying hens, but instead of pecking along doing their own thing, they were taking little seeds and corn from the ground and putting them in the gnarled old beak of Massey Harris. They were feeding him! As we watched, they with the food and then gently surrounded him. They guided him along in the coop to the water bowl and then over to the precious rays of sunlight coming through the fence. They gently pressed up against him to move him along, all the while clucking a little throaty “coo” to guide his direction.

For the second time in our farm history, we were witnessing something so out of the ordinary for these seemingly self-absorbed and not-so-bright birds. The care and love that Massey Harris had extended to these hens was now being repaid in his older years…and the picture of that kindness and graciousness still amazes me today as I sit down to write this blog.

So what can we learn from this story that relates to our own life. Massey Harris to me is a perfect example of what our life journey should be. He was strong no doubt, but he was not a dictator or heavy task master. He was kind and gentle not only to the hens in the flock but to Rachel. He also had a desire to be the protector, willing to sacrifice himself to those around him. He willingly gave of himself for others. In John 10:11 – 16, Jesus is giving a mini-message to the Pharisees regarding who knows and accepts Him and who He would acknowledge and accept into His flock. He says,

This passage should be an encouragement to us that Jesus has our back. He knows us, loves us, and will stand before us to battle Satan for our very lives. He does not run from a fight and He is assured of victory on our behalf. Whether it’s a physical threat like cancer or a spiritual and emotional struggle like the death of a loved one or debilitating depression, He will not forsake us.

The second part of verse 5 in Hebrews 13 says,

“I will never leave you nor forsake you.”

And it goes on in verse 6 to quote Psalms,

“The Lord is my helper; I will not fear; what can man do to me?”

These verses speak to me personally. Do I know this mighty shepherd? Have I committed to be a part of His flock? Do I truly give my life to Him daily? Do I embrace and recognize the gift of His love and protection? Maybe you, like me, are going through some difficult times right now. Have I allowed myself to take shelter under the giant outstretched wings of God?

Here are a few things that we need to do to be sure we are part of the flock of heaven:
1. We need to know the shepherd personally and desire a relationship with him. This comes through taking time to read his words and communicate with him through prayer, praise and songs of thanksgiving.
2. We need to recognize that being a shepherd is a full time job. He doesn’t just work on Sunday and then leave us on our own the rest of the week. He doesn’t take hour long lunch breaks and you’ll never get a busy signal when you call. He is here for us 24/7.
3. We need to set aside some of our natural human desire to be in charge and run it all ourselves. The shepherd wants to care for us, but we have to be willing to let him do his job.

Massey Harris eventually died and was given a farm burial befitting his place of honor in Rachel’s flock and in her heart. But as I think back on this story, I can visualize a picture of Jesus – just like Massey Harris – stretching out his arms and covering us with his love and grace. He did this for each of us…on the cross of Calvary… and this is my Easter story.