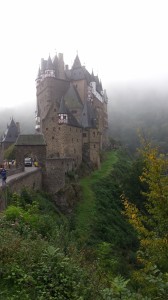 When you hear the word Germany, your mind immediately thinks of castles, fairy tales, deep dark forests, and Oktoberfest.

But there is so much more to this wonderful country than that. Over the next few weeks, I’m going to share some of the special cultural locations that we visited on our recent trip to Germany and Austria. 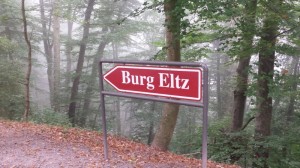 First let’s look at a few of my favorite castles I have visited over the years. Now, right off, I want to mention that there is a huge difference between a castle and a palace. Both should be on your travel itinerary, but be sure you understand the purpose of each type of structure to help you plan where and what you want to see. If you are looking for old and rustic, you are most likely thinking of a castle. If you are interested in fancy rooms with ornate décor and grand gardens, you are going to want to plan on visiting several of the beautiful palaces found in Germany. I will be sharing about both.

A castle is primarily a live-in defense structure. Usually situated at some strategic and defensible location for the purpose of protecting the surrounding farms and trade routes. Most are self-contained; meaning that if needed, the people inside could live and survive during a siege for quite some time. This includes places to store food and water as well as weapons. 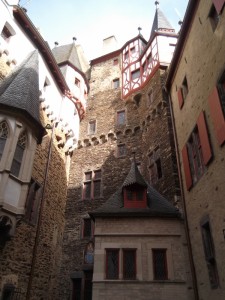 A palace was typically a residence of some high royal person or family. Some were defensible, however, they were mostly for living and showing off the wealth and status of the royals.

I have several favorite castles, but I want to start off this series with the medieval classic, Burg Eltz

. It was the first castle that we visited on our recent trip. My Mom and I were excited to share it with my son and my husband since we had been there several years ago when traveling with my niece and daughter. It is considered by many to be one of the top ten most beautiful castles to visit in Germany. Maybe that’s why we found a very unique sign at the entrance to the road. It says (roughly translated), “mirror, mirror, on the wall, who is the prettiest in all the land.” It shows a wonderful image of the castle. For me, it truly is one of the prettiest castles I have visited. 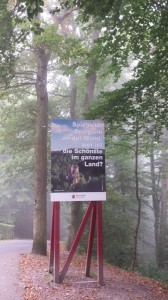 One of the reasons that I love it so much, is that it is smaller and more intimate than some of the larger more grand castles I’ve been to that usually sit atop hills overlooking larger cities. Burg Eltz sits out in the valley and the forest closed off from city traffic and busy streets. When you enter the gates, you truly feel like you’ve walked back in time.

Burg Eltz is located in the beautiful Mosel River valley in western Germany almost into France. It is a valley rich with vineyards, quaint little towns, Roman ruins and castles. Open for tourists, this castle remains in the private ownership of the Kempenich Family that have lived there for thirty-three generations, dating back to the 12th century. The castle is surrounded on three sides by the Elzbach River and was an important Roman trade route for farmers taking their produce to market. Burg Eltz consists of eight stories with eight towers that reach heights of 131 feet. It has the distinction of having never been attacked in war, so it is very much left untouched. 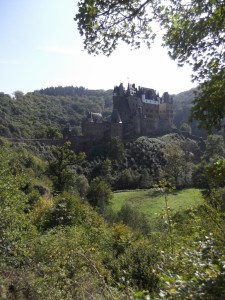 As for the castle itself, it has remained pretty much the same for eight centuries, including many original pieces of furnishings as well as a wonderful armory and treasury with cultural artifacts. These can be seen on tour. There are English tours available.

As with all major castle attractions, we have found that it works best to be the first one there in the morning hours to beat the crowds and the tour buses. You will need to park and then catch a shuttle bus that drops you off at the beginning of the castle rampart. It is then just a short walk to the castle gates. There is a nice gift shop by the gates and several little restaurants available for coffee or lunch. 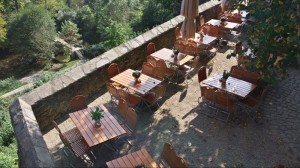 For those with mobility difficulties I will say that you may not be able to climb some of the stairs included with the tour, but you can easily walk around the outer edges of the castle by taking it slow and using the rails provided on the stairs. I did not see an option for wheelchair access, but check with the castle office for more information. 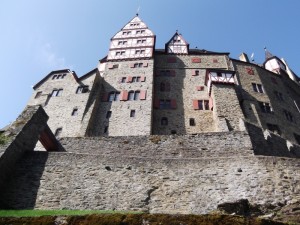 For those with strong walking legs and heart, there is an option to hike into the castle through the forest as well as several hiking trails that lead off into other areas as well. Including a section of the Mosel El Camino trail that goes right by the castle.

The castle is open March to November from 9:30 to 5:30. For up-to-date hours and fees, check out their website. 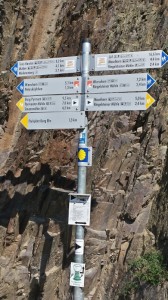 On our visit in September, we sent the guys off to take the English guided tour and my mom and I found a beautiful little table overlooking the river and the valley to sit and enjoy the beautiful sunny morning, a cup of coffee, a fresh pretzel and some great company with several young German families.