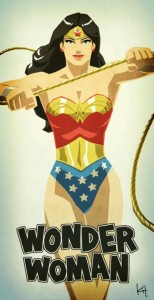 Growing up I loved watching Wonder Woman on TV. I would stare in horror as the story unfolded. It seemed that the bad guys were going to win and overpower her and take over the world. But in the end she always persevered. Sometimes she had to fight off bullets with her indestructible arm bands. But my favorite thing that Wonder Woman used to fight evil was her lasso of truth. Once captured and encircled with this powerful tool, the bad guy was forced to tell the truth and thus help Wonder Woman save the day.

The Bible talks about a lasso or belt of truth in Ephesians 6:14. Here we have a description of the “armor of God” which is a metaphor to describe attributes and character traits that we need to incorporate or “put on” in our daily lives in order to circumvent and outwit the sneaky tricks of the Devil.

In ancient times, a soldier’s belt was vital to his success in battle; sometimes meaning the difference between life and death. Not only did it hold up his armor and have places to attach various weapons of war, it also serve as a protective gird over vital organs such as the kidney and liver. It encompassed the wearer with life protecting force.

In a “real world” sense, the belt of truth is to be figuratively put on each and every day to help us discern right from wrong… truth from lies. It is powered by the Holy Spirit and should work in and through our life.

It goes hand-in-hand with the other components of the Armor of God which are the:
• Breastplate of Righteousness
• Shoes of the Gospel of Peace
• Shield of Faith
• Helmet of Salvation
• Sword of the Spirit

All together, these reminders of the attributes necessary to fight and win in the spiritual battle are essential to our survival.

I do not believe that it is any coincidence that the lasso and the belt are both circles. The circle is the symbol of life in many cultures and religions. It is a perfect shape with no beginning or end. In our marriages, it is a symbol of our covenant for eternity. The circle is reflected in all of God’s creation as well. Just look to the skies and see the heavens laid out for us in a series of circles.

The Lasso of Truth and the Belt of Truth are both designed to bring honesty, knowledge and light into our world so that we can live victoriously.

By using it and applying it daily, we find truth, hope, and peace….and freedom.

“Then you will know the truth, and the truth will set you free.”

I want to be triumphant in battle like a strong wonder woman of God, living my life with the belt of truth and putting on the full armor everyday; victorious against the attacks of the Devil and overcoming evil in the world!! How about you?