Continuing on our exploration of castles and palaces in Germany and Austria, we will visit Linderhof Palace in Bavaria, Germany for our next stop. 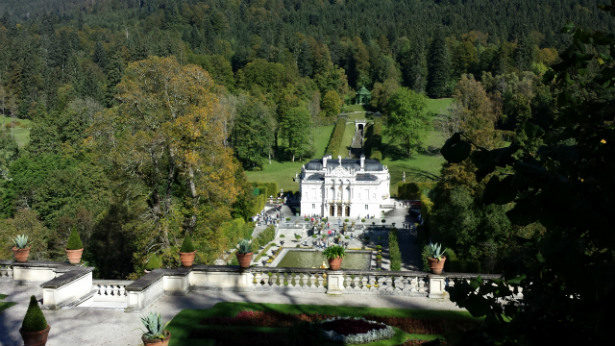 Situated in southern Germany, Bavaria is the largest state in the Federal Republic of Germany. Bavaria’s history spans time and connects it to Rome and Celtic cultural heritage. A few fantastic “walled” cities are also in this area; Rothenburg, Dinkelsbuhl, and Nordlingen. Bavaria is home to one of my all-time favorite cities; Munich. 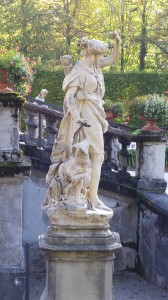 Linderhof Palace was purchased by the Bavarian King, Maximilian II in the early 1850’s. Linderhof appealed to his heir, Ludwig II for its remote and isolated location, given his somewhat eccentric and reclusive personality. Ludwig II was crowned King in 1864 and began several massive building and remodeling projects throughout Bavaria including work at Linderhof.

Ludwig started with the Royal Hunting Lodge and through several decades and thousands of dollars; that structure was eventually relocated, clad in stone and completed as his “mountain” residence. Sadly, King Ludwig died in 1886 before getting to see the final renovation of the grand royal bedroom.

Several things make Linderhof stand out. First is its beautiful rural location. While grand in style, Linderhof itself is rather small (compared to some of the massive palaces closer to the cities). As you are walking through the grounds and through the rooms, it almost feels intimate and homey despite its over-the-top décor and ornate furnishings.

We arrived to take the palace tour quite early in the morning to avoid the rush of tourist buses. Tours begin at 9 a.m. during the Spring and Summer, and 10 a.m. during the winter months. You should plan at least 2 – 3 hours to see just the basics that Linderhof has to offer. Plan a longer time for extending hiking, including the gardens and grotto. As we saw with so many German castles, there are an abundance of walking paths and trails to extend your visit into an all-day experience if desired. The tours of the interior of the main palace structure are offered in a variety of languages. Check the palace website for further details on hours, price and tour schedules. http://www.schlosslinderhof.de/englisch/palace/history.htm. There is also information on 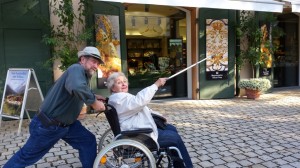 services provided for wheelchairs and others with mobility issues. For us, we requested a wheel chair when we paid our entrance fee at the information desk. This allowed my husband to easily push my Mom on the short trail to the main palace area. Once there, she was able to navigate herself. Additional mobility help would have been provided to access the multiple levels of the palace had we requested. We returned the wheelchair when we completed our day.

There are five main areas of interest when visiting Linderhof.

1. Trails and beautiful forests: Take your time when you visit to stroll through the beautiful landscape surrounding the main palace. The trails are paved and easy to navigate with good signage to help you know where you are going. We saw little forest streams, ponds with swans, and deep tall forests.

2. Historical structures: While most people travel to Linderhof to see the main palace, we enjoyed the quick jaunts into the smaller historical structures. Filled with wonderful authentic furnishings and art, and they give you a real glimpse into what it would have been like to visit here for a hunting expedition with the King.

3. The Palace: No photographs are allowed inside the palace itself, but great postcards are available at the main gate buildings. You can also see glimpses of the ornate beauty of the palace by checking out the “room by room” guide on-line. http://www.schlosslinderhof.de/englisch/palace/rooms.htm. The Hall of Mirrors is the last room on the tour and a personal favorite. Mind-blowing décor and the placement of the mirrors make the room seem to go on forever.

4. The Gardens: The gardens are truly beautiful. Flowers, sculpture, fountains all mesh together to form a delight at every turn. Many of the sculptures are related to Greek Mythology so brush up on your “Gods and Goddesses” before going to get the most out of your visit. The fountains are well maintained and inviting. The main fountain goes off several times a day solely through the pressure of the natural gradient. Well worth scheduling your visit to be sure and catch it. 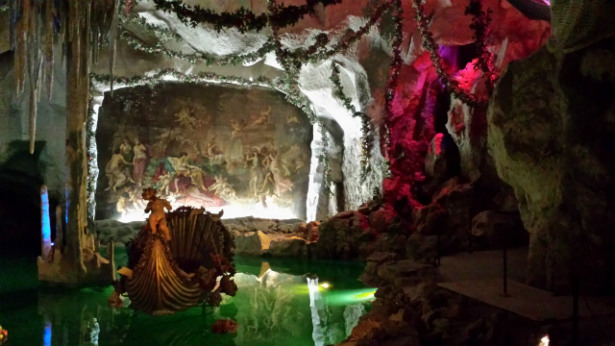 5. The Grotto: King Ludwig was in many ways ahead of his time in building innovation. This is very evident if you take the time to hike to the Venus Grotto. According to the palace website, “The artificial dripstone cave with its lake and waterfall was modelled on the Hörselberg from the first act of the Wagner opera “Tannhäuser”. This natural stage, built in 1876/77 by the landscape sculptor A. Dirigl, was lit by arc lights. The electricity for this was generated by 24 dynamos in the machine house 100 m away, one of the first electricity works in Bavaria. The Venus Grotto features a “royal seat”, a Lorelei rock and a gilt boat in the shape of a shell.” As we began our walk  down the path into the cave, powerful and majestic music from the composer Wagner was booming and filling the air with a sense of drama and suspense. As I stood there by the lake with the red, gold and blue lights illuminating the small stage, I could just imagine King Ludwig sitting in the “swan boat” listening to some fantastic aria being performed. Stunning! 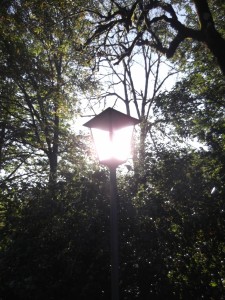 While some of King Ludwig’s other castles and palaces have gained more tourist interest, for me, my favorite will always be Linderhof. I hope if you plan a visit to Germany soon, you will add it to your itinerary.

Linderhof Palace is intimate opulence at its finest.