A few weeks ago I shared a story of Checkers the cow. With Mother’s Day having just passed by, I wanted to share another “motherhood” story from Tanglewood Farm.

After several years of living on our small hobby farm in Tillamook, Oregon, we had acquired a variety of animals. Chickens, rabbits, bees, pigs, cows, horses, cats, dogs and various passing varieties of birds and small pets all came and went on the farm. Each generation of animals brought with it a new set of chores and a passel of stories and memories. Then came Duce. 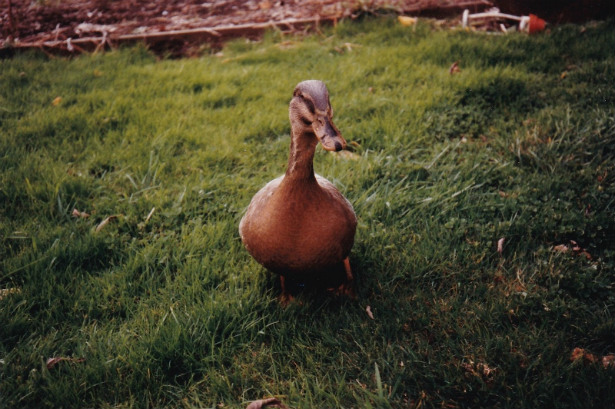 We acquired Duce through strange and unique circumstances. David found her wandering down the middle of the road late one night while on ambulance duty. After watching several cars narrowly miss her, he stopped, scooped her up and brought her home to the farm. We named her Duce for at the time we had no real any experience with ducks and we weren’t actually sure if she was a duck or a goose. She was an older bird that we surmised (after some research) had lost her life mate causing her to go “crazy” and wander the streets in utter dismay and sadness.

She immediately bonded to David as her personal savior and newly acquired “mate”. She would waddle down the driveway quacking excitedly when he heard his truck coming down the road. She followed him everywhere on the farm loudly demanding his undivided attention. She even helped him with the farm chores. One day as he was carefully thinning the corn from the newly sprouted rows, he did not notice that Duce was coming right along behind him pulling up each of the slender little stacks of corn that he had obviously missed. She thought she was helping.

But the thing that Duce wanted most in the world, David could not provide for her. She wanted to hatch a clutch of eggs. She dutifully and faithfully laid an egg every morning at around 7:00. Soon she started gathering the eggs and built a nest. Eventually she began sitting on her clutch. She was tireless as she sat….and sat. She only left momentarily once a day to eat and drink. She sat in diligent motherly vigil on her lovely blue-green eggs. Only, there were no babies in the eggs. Still, she defended these empty shells from the farm dogs who delighted in snatching her morning egg for a snack. She even defended her precious nest against a nasty raccoon that plagued the farm.

One day when we checked her nest we discovered she had added several pine cones and an electrical insulator that she had rolled all the way from the floor of the shop. For twenty-eight days she sat, but to no avail. Finally she gave up. The eggs all mysteriously disappeared. Duce moped around the farm for weeks. She was just not her same old self and this concerned us. She had lost some of her spunk and quack. Her intense motherly devotion touched my heart. She wanted so badly to have little baby ducks to follow her around as she made her daily rounds on the farm. It just wasn’t meant to be.

About a month later, we discovered she was again sitting on a nest. This one was better hidden and had a larger selection of eggs in addition to a few pine cones and the electrical insulator. Without giving it much thought, and acting out of pity for this undying mother’s love and desire, we carefully slipped a few fertilized chicken eggs into her nest. At least she would have the joy of hatching something even if it wasn’t a duck. She accepted these new eggs with eagerness. But after a few days, we began to question whether this had been the best choice. What would happen when the little chicks hatched? They would not be a duck. What would be the fate of the little chicks when Duce proudly introduced them to their first swimming lesson in the pond? Nature answered our concerns for several days later, the chicken eggs were gone. Where? We never knew.

Finally after another twenty-eight plus days of sitting endlessly in the hot August sun, she gave up. She approached the house one afternoon. Her feathers all ruffled and in disarray from the lack of care she had given herself while being absorbed in the task of being a mother. She quietly quacked a sad plaintive sound and disappeared into the bushes to find a cool spot to rest.

Duce’s story is a parable of a mother that had so much love to give, but was denied that opportunity due to fate. Not unlike the 15% of American women who yearn to have a child but can’t due to infertility (CDC, 2013). My good friend (we’ll call her Susie), tried for so many years to conceive and was finally told by all the doctors that she would never have children. This was a great sadness in her life. But God unexpectedly and miraculously provided her with a healthy pregnancy and a wonderful little boy a few years ago. Such a miracle. Such a blessing. 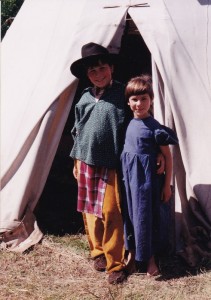 In the Bible there are many stories of mothers. Mothers who loved their children so much they resorted to lying to accomplish and fulfill their blessings. Mothers that endured great personal suffering to provide for their child. Mothers who sacrificed everything…even in letting their child float away into a mighty river to protect them. Mothers like Elizabeth and Mary who expressed tremendous joy in God’s gift of a precious new life in a passage of scripture in Luke called, “The Magnificat”.

Much of our daily lives as mothers are filled with commitment and sacrifice. Giving of ourselves, not only for our children, but to our spouses and parents. I have given much thought to how we can keep on giving and giving so freely without becoming bitter, resentful and burned out. Are we like Duce, willing to commit to sit through adverse situations even when we see no immediate results?

In order to daily give so much motherly love, we must be daily filled. Filled with God’s Holy Spirit. The times in my life when I have felt that bitterness start to creep in or was just “plain tired” of giving, is when I failed to make time to seek my heavenly Father’s love, nurturing and “filling”. In order to continue to give we must, as women, take time for ourselves to recharge our tanks. Uplifting music, time with God, a quiet walk, a nice hot bath, or a special day away…these types of activities are essential and necessary to keep us going in this blessed calling of motherhood.

This is my prayer on this Mother’s Day: Father, help me to be a faithful and never tiring giver to my family. Gently bring me to you on a daily basis to be filled with your Spirit of perseverance and love. May I be ever reminded that my husband and each of my children and my grandchild are a precious gift from you…even on the bad days. Lord, help me to be like Duce, the duck.

Her children arise and call her blessed; her husband also, and he praises her; Many women do noble things, but you surpass them all. Charm is deceptive, and beauty is fleeting; but a woman who fears the LORD is to be praised. Give her the reward she has earned, and let her works bring her praise at the city gate. Proverbs 31: 28-31